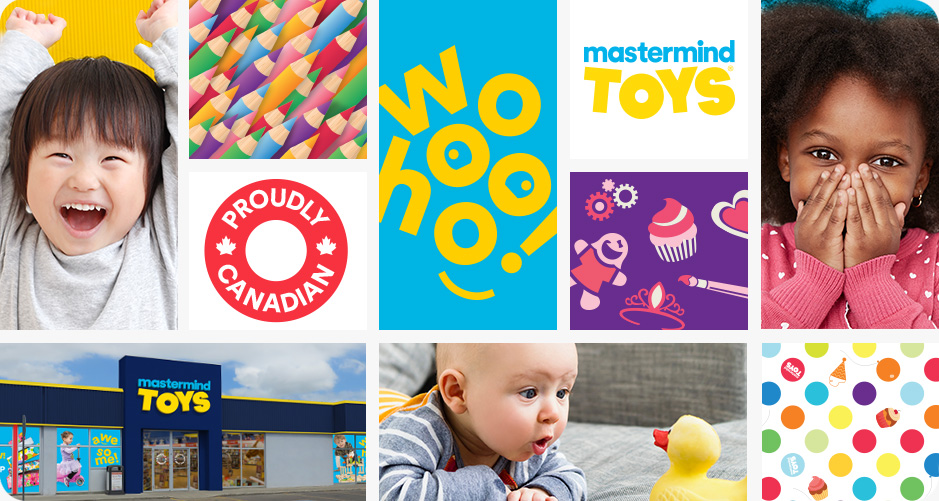 We strive to be your toy store of choice by providing:

Fostering fun for more than 35 years.

The Mastermind crew discovers they really love meeting and helping families with young children. They want to offer more than just computer games, so they open a second shop: Mastermind Educational. Early on, they pledge to carry only the very best toys, games and books—things they really love. So they become curators, venturing into unusual markets all over the world to discover special items with a real “wow factor.”

A woman on her way to a birthday party asks, “Where is your wrapping paper section?” She gets a terrific gift—and gives the staff a great idea. Mastermind Toys begins offering complimentary in-store gift-wrapping and our signature wrap and curly bow make their debut!

Over the next decade, Mastermind Toys grows to a total of 10 locations across the greater Toronto area. Its reputation as a “smart little toy store” is built on two things: the Levy brothers’ insatiable curiosity and unfailing attention to feedback. Then and now, customer suggestions, requests and questions help to refine Mastermind Toys’ unparalleled selection.

Mastermind Toys reinvents their store locations with a fresh logo and colour scheme - a larger format, and whole new look and feel. Even better: they launch their first website - mastermindtoys.com - and welcome customers from across Canada and the United States.

The Levys open their eleventh store in the greater Toronto area. As independent owners they’ve grown their company into a remarkable local brand.

Mastermind Toys celebrates 25 years in business—and is ready to grow again. The vision: to bring their top-quality selection and exceptional customer service to toy-lovers across Canada. In partnership with Birch Hill Private Equity, Mastermind Toys prepares to expand. Co-founder Andy Levy retires; Jon Levy stays on as CEO and CTB—that’s Chief Toy Buyer, of course. Most importantly, Mastermind Toys continues to be proudly owned and operated by Canadians.

Humphrey Kadaner joins Mastermind Toys as President and Chief Operating Officer to help with plans to expand the Mastermind brand to more than 50 stores across Canada. Expansion begins with new stores in Burlington and London, Ontario.

Mastermind Toys reaches two milestones opening their first locations in British Columbia and Alberta—both of which are greeted with enthusiasm. By year’s end, several more Ontario stores celebrate their Grand Openings, bringing to 18 the total number of new Mastermind Toys locations in the three years since partnering with Birch Hill.

Growth continues with seven new stores in Alberta, British Columbia and Ontario. So Mastermind Toys sets a new goal: to be operating more than 75 stores across Canada within the next five years.

Mastermind Toys achieves another first, opening its first Manitoba store in Winnipeg. It brings to 10 the number of new locations opened that year, chiefly in Alberta and Ontario.

Mastermind Toys also launches a partnership with WE that raises more than $200,000 to support youth education in Canada and overseas.

Alongside our charitable partner WE, Mastermind Toys continues to inspire young people to create better communities and a better world, raising $400,000 and making a difference at home and overseas.

In its thirty-third year, Mastermind Toys celebrates with a brand-new website. Redesigned to offer a more satisfying, streamlined shopping experience, the new mastermindtoys.com is a website worthy of Canada's largest specialty toy and children’s book retailer. Real-world expansion continues as well, with 12 new locations opened, including their first 5 stores in the Maritimes. With this growth, Mastermind Toys is now operating 60 stores across the country!

Mastermind Toys’ partnership with the Canadian social enterprise WE continues to grow, raising $450,000 in 2017. Over three years, with the support of generous customers, Mastermind has raised more than $1 million!

This year of new initiatives was all about the customer. Convenience was the keyword for the new Reserve online, pick up in-store service. Time-pressed customers can browse on their phone, computer or tablet, and within an hour staff at their local store will set selected items aside for pick-up.

The second major initiative was Mastermind Toys Perks, the company’s first-ever loyalty program. Sign-up is fast, easy and free, and members enjoy a wide range of benefits, from free in-store services to exclusive sales and promotions to personalized recommendations – and some exciting surprises year-round.

In September, Mastermind cut the ribbon on its new St. John’s location: their very first store in Newfoundland and Labrador. It’s one of five new locations opened in 2018, bringing the total number to 65 – and growing.

Here are some quick facts about us.

Mastermind Toys is proud to offer a handpicked selection of more than 6,000 specialty toys and more than 4,000 children’s book titles.

Mastermind Toys is proud to offer complimentary gift-wrapping on all in-store purchases. Gift-wrapping and personalized gift tags are also available for online purchases for a nominal fee.

Each and every year, Mastermind Toys supports diverse family-related, non-profit organizations in the communities in which we operate.

In 2015, Mastermind Toys also partnered with WE, a movement that empowers people to change the world. Together, our organization’s efforts are providing Canadian students with tools like leadership training and classroom activities to learn about social issues they care about – and then become agents of change. Overseas, efforts are supporting WE villages, building classrooms in Kenyan communities, helping to renovate and refurbish existing schools, train teachers and launch extracurricular activities for students. Alongside our exceptional customers, Mastermind Toys has raised more than $1 million dollars to date to support these youth education initiatives in Canada and overseas.