Ninja: The Most Dangerous Game

The first in a series of original graphic novels, starring Ninja (Tyler Blevins)–the most influential public figure in gaming today–as he embarks on exciting gaming adventures, with the fate of the world at stake. Tyler Blevins (aka "Ninja")–the undisputed champion of the world's most popular online battle royale–enjoys a captivated audience of millions as he does what he loves: decimating the competition. At the end of one fateful stream, however, Ninja receives a strange package at his doorstep containing a mysterious contraption that appears to be a game controller. With a mind of its own, the controller clasps on and teleports Ninja right into the battle royale's universe where he must find a way to stay alive, win the game, and, ultimately, save the world. Along the way, Ninja meets up with this gaming friends who were also transported and together they fulfill a destiny larger than he ever could have imagined\ 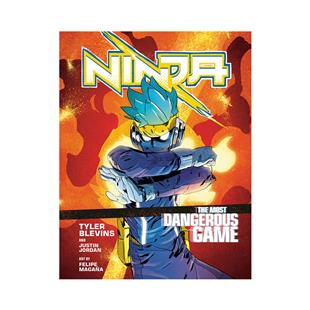